What a week! How many times have you reached the end of a weekend and though that to yourself?  This past week really had me up, down and sideways, which always makes me step back and look at things differently.

I’ve thought a lot this week about hoping and wishing for things.  There was a situation in my personal life that looked like it was going to work out better than we had expected, but then it just didn’t pan out the way we had hoped or wished.  It seems to be the way of life for us, and you’d think we would learn to not expect anything at all.  After all, it would be easier to not hope for anything and be pleasantly surprised, than it would be to think something is going to work out and have it fall through.  Does this sound like days, weeks, or even years you have experienced in your own life?  When I consider the possibility of abandoning hope or expectations that things will work out, it flies in the face of what I have believed.  I’ve always believed God is working everything out for my ultimate good, but what happens when you feel let down over and over until you stop asking for things?

There are a lot of televangelists who tell us we can ask for anything from our Heavenly Father, and I agree that’s true.  We have every right and privilege to ask, but we must remember that sometimes the answer is wait, and sometimes the answer is no.  Just because we ask for it, doesn’t mean it is best for us.  Sometimes what is best for us is something totally opposite of what we ask.  In theory, and as people of faith, we know this to be true but it can be so incredibly defeating and discouraging when it happens over and over.  It is certainly easy for me to start looking at things differently and question why I even ask in the first place.  I start becoming a spiritual “realist” and soon I’m not asking for anything anymore because I’d rather not be disappointed…again.

When my situation came up this past week, it looked like God was doing something above and beyond for us, but then it didn’t happen.  Do you know what that made me think?  I started thinking “here we go again; God must be disappointed in us to dangle this out there and then yank it away.”  I was totally disappointed in God and it temporarily undermined my trust in Him.  Yep, my so‑called faith took a tumble into the abyss for a little while.  But why?  Because my perspective was out of whack on two points:

Once I began thinking negative thoughts about who God is and who I am as His child, everything started to tumble down the rabbit hole right behind it.  I didn’t stop with being disappointed over the present circumstance, but rather continued ruminating on every disappointing circumstance in my life – now or in the past.  I became overwhelmed and depressed.  I told myself I was going to become ambivalent in my prayers and requests to God.  You can imagine the thought process: “If I just ask for things but then don’t expect anything in the answer, I won’t be disappointed.”  I started thinking maybe that’s how God actually wants me to view things – unexpectant and ambivalent.  I have to admit, it was simply another depressing thought, because I couldn’t see past the darkness in which I was tumbling.   The truth is “unexpectant and ambivalent” are the opposite of “trust and certainty,” but in my darkness I could not tell the difference. 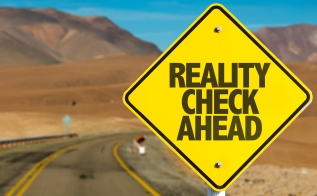 Gratitude does not come easy in the storms of life.  When we start jumping to conclusions about what God is or isn’t doing in any given situation, instead of leaving things in His hands and trusting Him to do what is best for us, we often end up disappointed.  The majority of our issues, however, come from thinking that the “best” means the most lucrative or easiest.  Our definition of “good” and “bad” are based on what we can see with our own eyes, or ideas, but God has the vision and perspective of eternity and knows every aspect of our situations.   My uncle used to say, “We don’t really want to trust God to take care of us because what if He doesn’t take care of us like we want to be taken care of?”  I think that is more accurate than most of us would like to admit.  God doesn’t want us to get so conditioned by life that we lose our passion, joy and peace.  He doesn’t want us to ask Him for things and not care what the answer is.  He wants us to be content in the outcome of our requests as a result of understanding who He is and how much He loves us, not because we simply stopped expecting anything from Him.

Look, God knows we are human and that we are going to experience disappointment, hurt, betrayal and many other emotions.  He also knows it is our tendency to let it overwhelm us.  The shortest verse in the Bible is John 11:35 and it simply says, “Jesus wept.”  Lazarus had died and when Jesus got to the tomb and saw his sisters and other friends weeping, it moved Him to the point of tears as well.  Jesus knew He was going to raise Lazarus from the dead and yet He still wept.   He also understood that death here is temporary.  He knew, better than anyone, that life continues for His children in Heaven, and yet He still cried.  Why?  Because knowing the outcome of the story doesn’t mean you don’t cry at the sad parts.

As people of faith, we know that eventually everything works out for our good, but that doesn’t mean we won’t have to deal with tears, discouragement, anger or depression along the way.  What matters is how we keep walking in spite of it.  It doesn’t mean we won’t have times where we are so tired or discouraged that we curl up into a ball to try and catch our breath; what matters is what we do with that breath when it returns.  Will we use it to perpetuate the darkness around or within us, or will we lift our voice like Paul and Silas in prison and praise the One who loves us and has promised to take care of us?

For me, I don’t want to be blinded to all the good God is doing (or allowing) in my life because of my inability to let go of what I think is “best” for me or my loved ones.  I’m not saying it will be an easy thing to do or a perspective that will be easy to maintain.  I’m just saying, there is no other way to truly experience the peace that passes all understanding and to live the abundant life He offers us.  It’s time to change our definition of what “abundance” truly means.

1 thought on “Disappointed By God?”