Lately I’ve been thinking a lot about the concept of living where you are, in spite of the wounds you have caused or how you may have been wounded by others.  I’ve talked before about how important it is for us not to hide.  It is so important that we show ourselves.  It is the only way to combat the isolation that drives most of us to the brink of insanity.  Don’t be afraid of your wounds.  We are all wounded in some way and anyone who says otherwise is lying to you.

I keep coming back to a bible story in Mark 5:1-19 that really touched me a few years ago.  There was a possessed man who was living among the tombs.  The people of the town he called “home” had rejected, ostracized and thrown him out to fend for himself.  He had become violent, crazy and frightening to the “normal” people of the town.  They had even put him in cuffs and chained him but he was so out of his head that he had broken them. 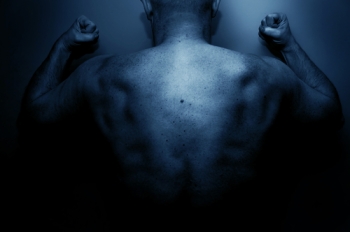 They didn’t want him, so here he was living out in the tombs…naked and totally out of his mind.  He cried out and even cut himself trying to get relief.  Nothing helped.  Nothing worked.  So Jesus comes through and heals him by casting out his demons into a bunch of pigs that ended up killing themselves.  When the people saw this man sitting there dressed and in his right mind, it actually scared them!  They were not convinced the change in him was real.  The man‘s reaction to this amazing event is totally understandable.  He was SO incredibly thankful for his restoration that all he wanted to do was to go with Jesus, to follow Him wherever He went and to serve Him.  His motives were pure!  We would applaud His desire to go with Jesus but the story tells us Jesus told him No and to instead go home and tell others what had happened to him.  For most, the story ends there but I see so much more.

You see, it’s easier for us to be different or become a better version of ourselves if we go somewhere that people don’t know us or our history.  We can choose what to share with them from our past and paint a prettier picture of who we are.

It’s easier to start over somewhere else not only because we are with people we haven’t wounded, but also with people who haven’t wounded us.  Restoration of our selves is easy because it is between us and God.  Restoration of our relationships or influence is much more difficult because it involves others.  When Jesus told this man to go home, it was to a much different situation than comes to mind for most of us.  If it was me, I might not be happy about having to stay where I am but I have a good life, friends and family here.  Going home for this man, to HIS situation, would have been much more difficult.  He was going to have to be with people who had wounded him and thrown him away.   He was going to have to face people he had wounded or scared.  He would have to face things HE had done and said – some he might remember and some he might not.  Why would anyone even listen to him when he proclaimed what God had done for him and how his life had changed?  Why would they believe him?  The truth is they probably wouldn’t!  It might take years to overcome his past because these people KNEW him!!

It’s much easier for us to go to people we don’t know than to those who know us and have seen our faults.  BUT to live where we are – through the difficulties – is where we have the most influence in the long run.  When people who know us or have seen us at our worst finally see the change in our lives and understand that we have truly changed, then it is different.  It has a much deeper impact than if they simply heard stories of where or how we used to be and how we came out of it.  Just like this man, it may take a long time, yes – even years, for people to finally see us as we are instead of how we used to be.

Some may never be able to let go of their old visions of us but it doesn’t matter.  We cannot force them to open their eyes but it is still up to us to live where we are planted.  It isn’t always easy, especially when there are wounds involved (ours or the ones we may have inflicted on others) but if you really want to change the world, start with yourself.  And then be willing to humbly stand strong even if it takes a while for the world around you to finally see things differently too.  Be humble.  Be honest.  Be open.  Be forgiving.  Be you…and trust that sometimes perspectives can only be changed with time.

(Here is the text of the story from the book of Mark:  “They went across the lake to the region of the Gerasenes.[a] 2 When Jesus got out of the boat, a man with an impure spirit came from the tombs to meet him. 3 This man lived in the tombs, and no one could bind him anymore, not even with a chain. 4 For he had often been chained hand and foot, but he tore the chains apart and broke the irons on his feet. No one was strong enough to subdue him. 5 Night and day among the tombs and in the hills he would cry out and cut himself with stones.  6 When he saw Jesus from a distance, he ran and fell on his knees in front of him. 7 He shouted at the top of his voice, “What do you want with me, Jesus, Son of the Most High God? In God’s name don’t torture me!” 8 For Jesus had said to him, “Come out of this man, you impure spirit!” 9 Then Jesus asked him, “What is your name?”  “My name is Legion,” he replied, “for we are many.” 10 And he begged Jesus again and again not to send them out of the area.  11 A large herd of pigs was feeding on the nearby hillside. 12 The demons begged Jesus, “Send us among the pigs; allow us to go into them.” 13 He gave them permission, and the impure spirits came out and went into the pigs. The herd, about two thousand in number, rushed down the steep bank into the lake and were drowned.  14 Those tending the pigs ran off and reported this in the town and countryside, and the people went out to see what had happened. 15 When they came to Jesus, they saw the man who had been possessed by the legion of demons, sitting there, dressed and in his right mind; and they were afraid. 16 Those who had seen it told the people what had happened to the demon-possessed man—and told about the pigs as well. 17 Then the people began to plead with Jesus to leave their region.  18 As Jesus was getting into the boat, the man who had been demon-possessed begged to go with him. 19 Jesus did not let him, but said, “Go home to your own people and tell them how much the Lord has done for you, and how he has had mercy on you.”)